We have official word from the doctor that Wesley is allergic to milk so, for the next few years at least, it's all soy for Wesley. He's also allergic to eggs and dogs (don't worry, this last one is not a food allergy). The funny thing is that he can eat things that have been baked with eggs and milk in them and he doesn't react. By "react," I mean have itchy eyes, cough because his throat is closing and break out in hives - all things that have been known to happen after consuming various food products containing dairy and/or eggs. The doctor also told me that his chronic congestion could be from the allergies.

Most recently, the congestion lead to a sinus infection that resulted in 10 days of fighting with my strong-willed middle child to take a twice-daily, cherry-flavored antibiotic...mmm. And along with the antibiotic came diaper rash caused by...well, we all know what happens when the good stomach bacteria gets "zapped." Being the concerned mother that I am (I admit that I was just as concerned about saving myself from the nasty diapers as I was about relieving my poor child), I checked the "dairy" section at Super Target for some soy yogurt that might help my little guy's stomach. Success! It comes in a 6-pack (3 strawberry, 3 peach) and, surprisingly, it isn't any more expensive than the regular yogurt we get. Anxious to reap the benefits of the active cultures in the yogurt, I offered a carton to little Wesley at snack time the same day. I found out that the days of feeding Wesley are long gone and even the obstacle of a spoon will not get in the way of his mounting independence. 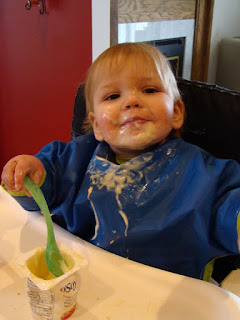 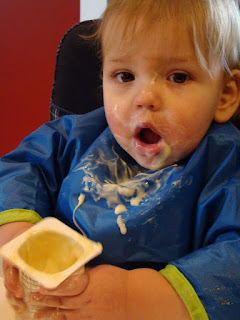 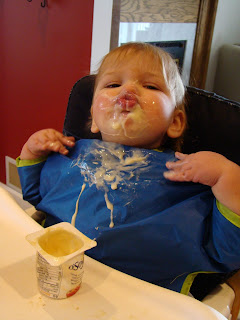 Yes, that's our Wesley...hot-tempered, strong-willed and fighting daily to be as "big" as his big brother. At the same time he's our sweet, lovable funny man, doing whatever it takes to make us laugh. 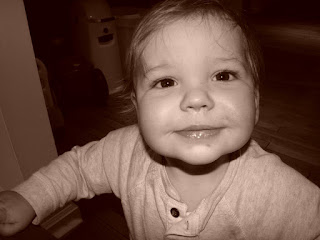 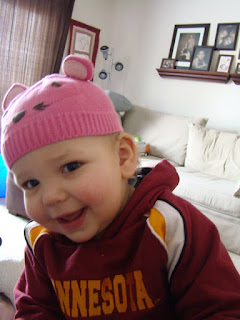 Please note that this is Elie's hat that Wesley insisted on wearing. At first it was a game, then simply an accessory to his Gopher sweatsuit as he continued to sport the pink mouse beanie while moving on to bigger and better play opportunities.
Posted by Beckie at 9:05 PM 2 comments:

We Didn't Name Her Snake 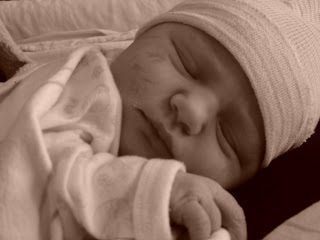 As much as Jack tried to persuade us to go with Snake (at least for a middle name), we opted for Elise Katherine instead. Elise made her entrance Saturday, January 3rd at 1:34 pm. She weighed 8 pounds, 11 ounces and was 22 inches long. She looks very much like her big brothers.
Labor was quick and uneventful, just the way you'd want it. I checked in at 7:30, was hooked up to pitosin by 8:30, five hours later I pushed three times and Elise was here.
Posted by Beckie at 2:10 PM 4 comments: