Rescuing and Piercing and Being 7

She wanted a costume. I wanted our little girl to look like...well...a little girl, so the kind of costume that can be ordered was out of the question. On to plan B, which was a shirt off the clearance rack at Target, dance shorts from Once Upon a Child, a DIY headband from Michaels (also on clearance and, bonus, it came in a 3-pack with 2 other totally wearable headbands), and a cape we already had at home. Viola! An adorable, totally-appropriate-for-a-7-year-old Wonder Woman. 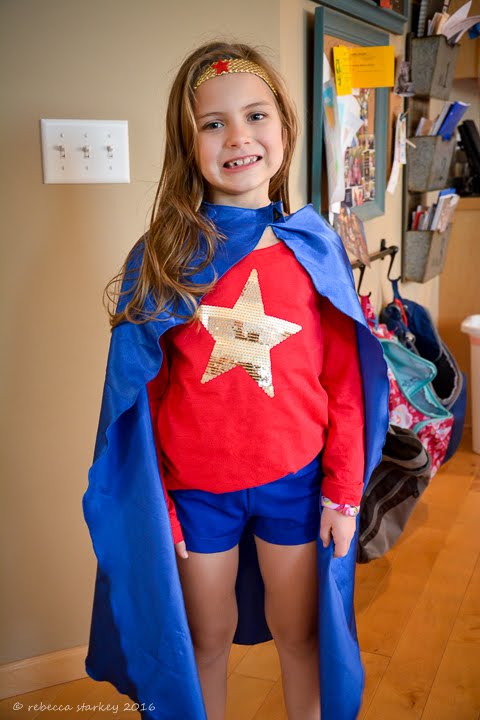 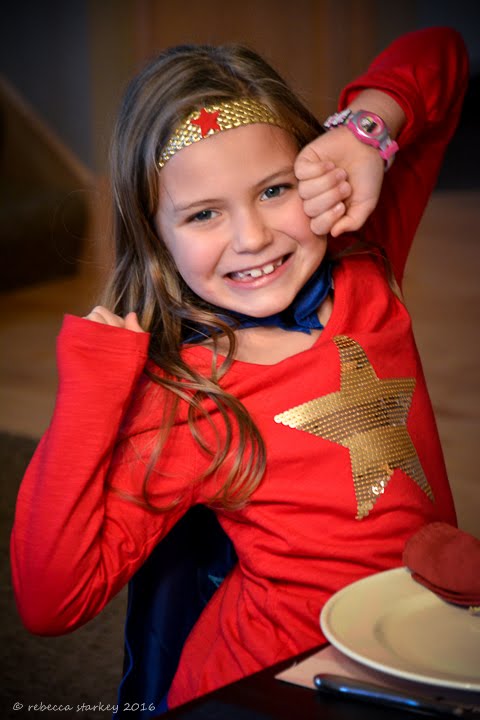 I had some super hero papers left over from when I decorated the kids' cave in the basement (way more fun and less scary than it sounds) that I used to cover some chipboard letters. The chalk wall became the backdrop for a comic book fight scene. 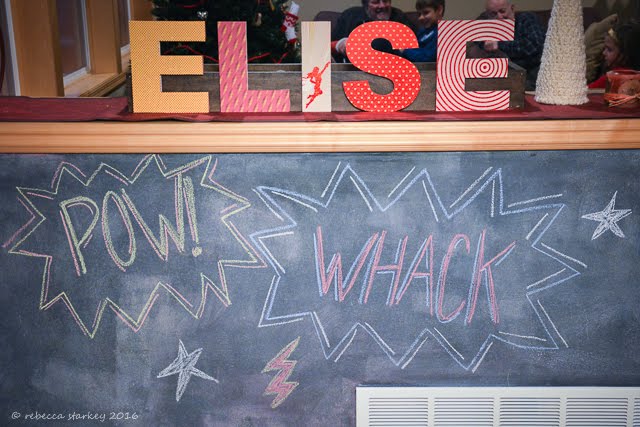 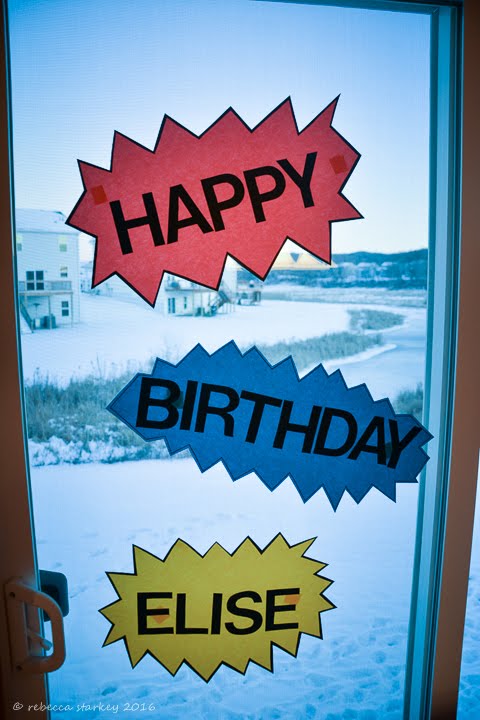 and some leftover red tinsel bursts completed our backdrop (I promise they're red, it's just that the lighting in the picture was so bad I had to make it black and white). 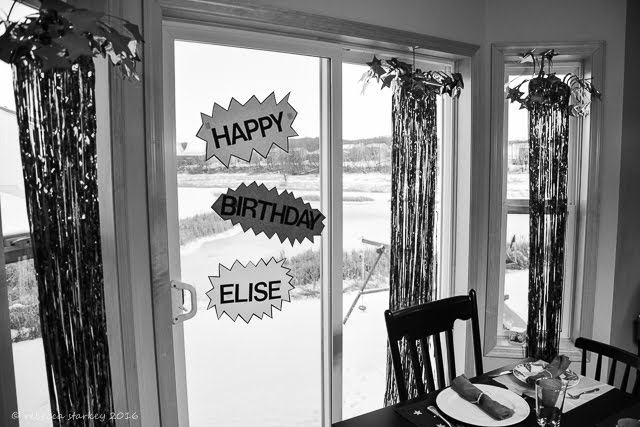 The table was set with star-spangled placemats and golden-lasso-tied napkins. I'd like say we served perfectly themed super hero cuisine, but the birthday girl requested lasagna so we went with what made her happy. 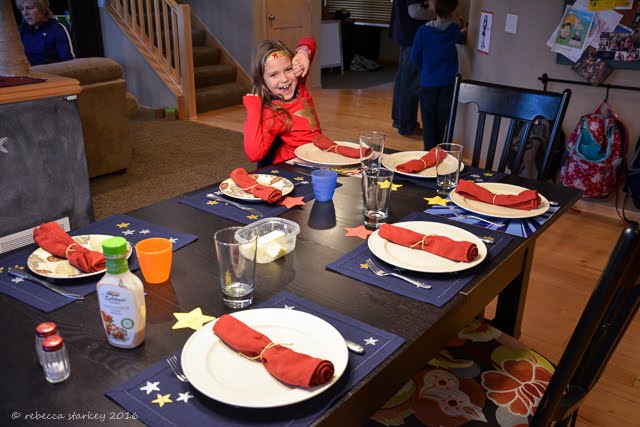 On the morning of party day I asked Elise what she was looking forward to most. Her reply? The games! Uh...I hadn't really planned any. So in the final hours before party time I was cutting out capes for Pin the Cape on Wonder Woman, 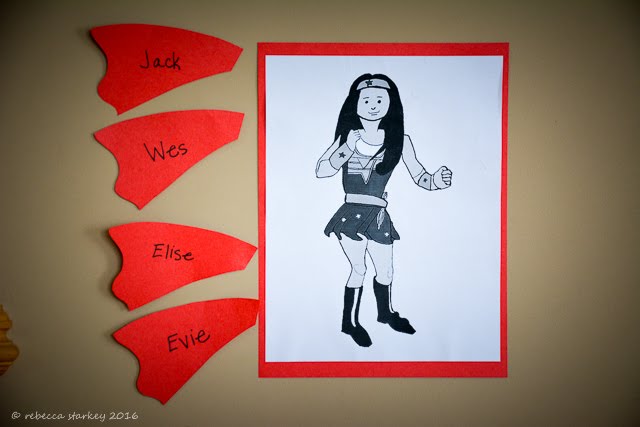 And I had Elise covering clothes pins with super hero washi tape for Villian Crush (you know...the clothes pins were like rocks dropping onto villains in the jar...are you with me?). 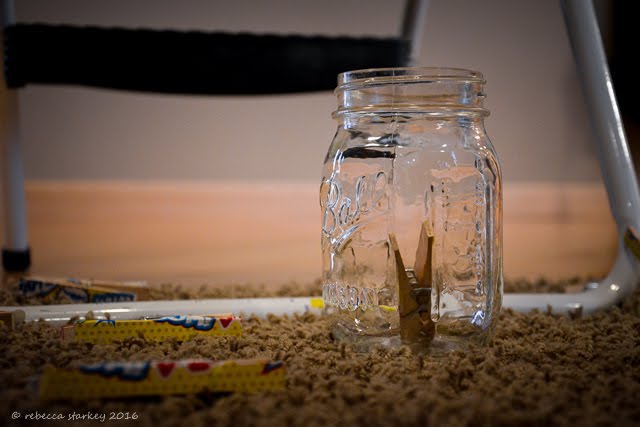 Everyone got a turn. 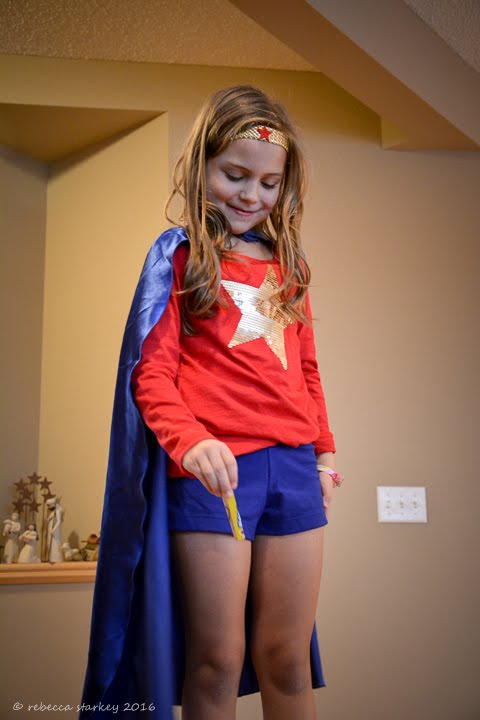 Surprisingly, Evie, who's method was to throw the clothespin as hard as she could at the jar, moved on to round 2 after tying for first place. Not surprisingly, Jack, who was by far the furthest away from the jar, didn't make it to round 2. 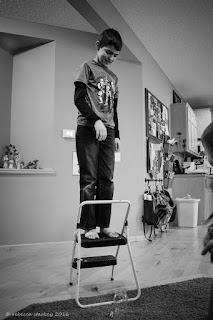 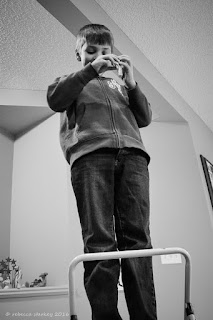 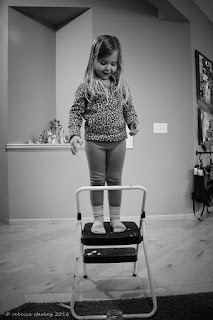 Dessert time is probably my favorite part of any party. I agonized over the cake, going back and forth between daring to try fondant and sticking to much more familiar buttercream. In the end, buttercream won out and my star tips got a good workout. 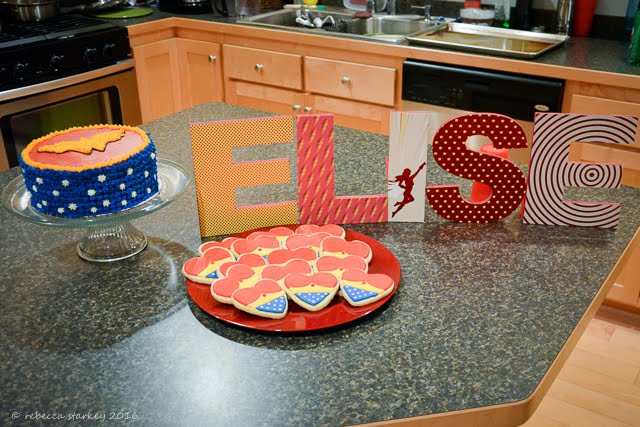 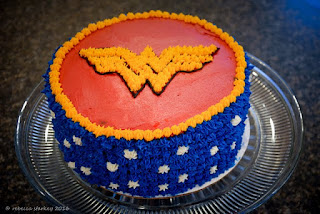 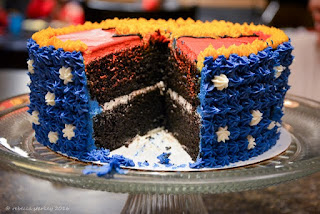 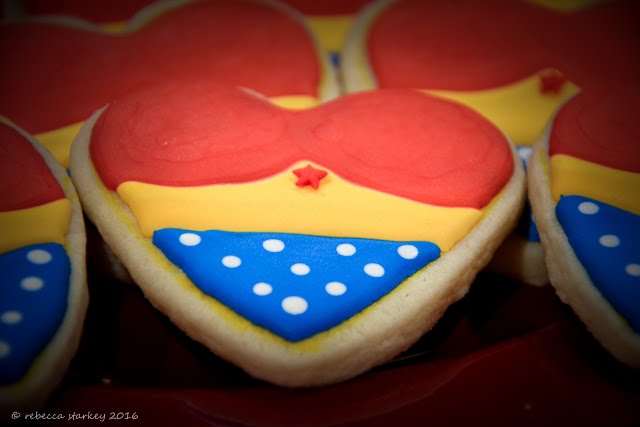 I think both Elise and her sweet-tooth were satisfied with the results. 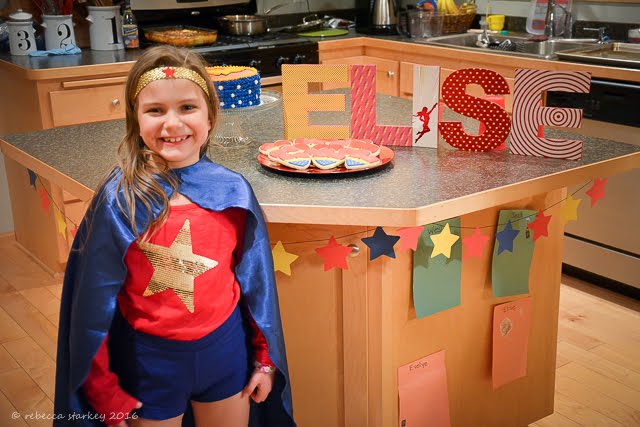 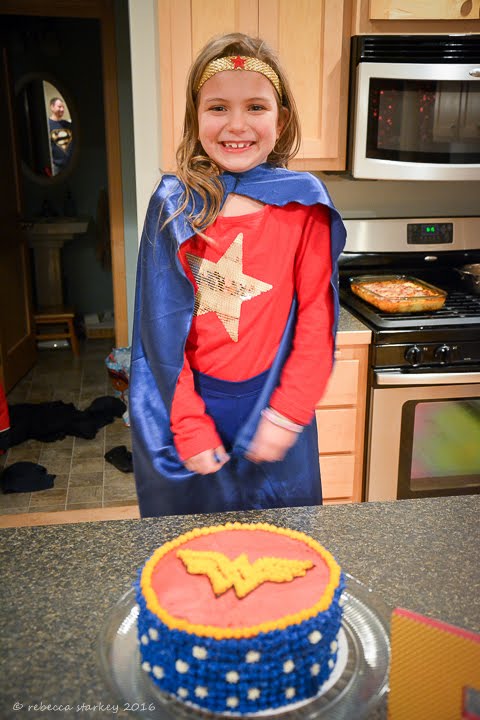 Elise chose to get her ears pierced on her birthday date. We ended up just having a girls day since Sean was feeling under the weather. 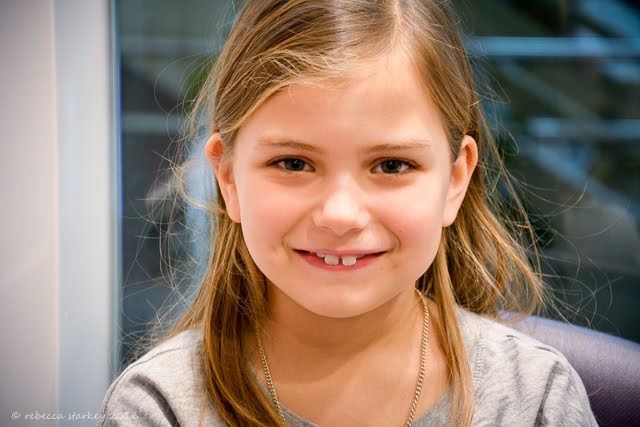 One final picture of her bare ears. 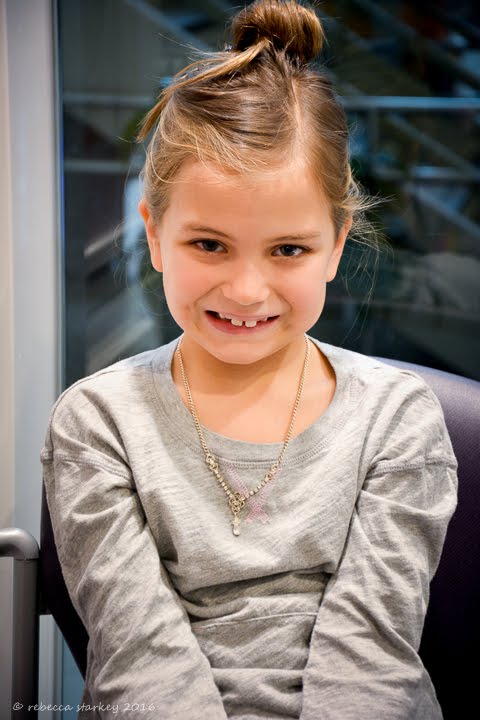 She barely flinched when the earring went in. 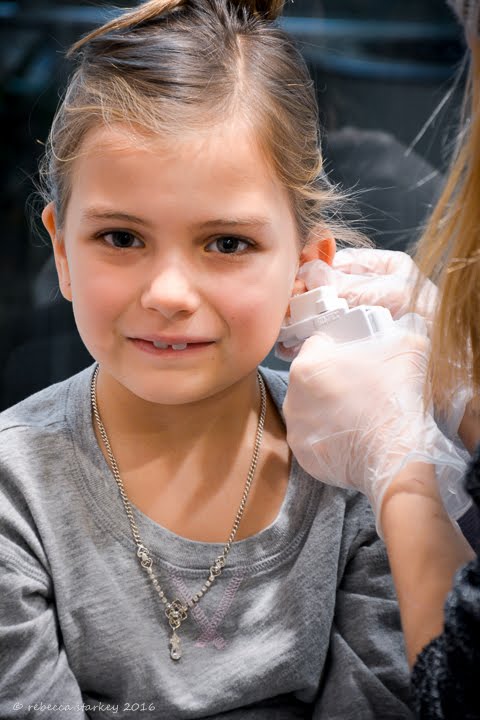 One down, one to go. 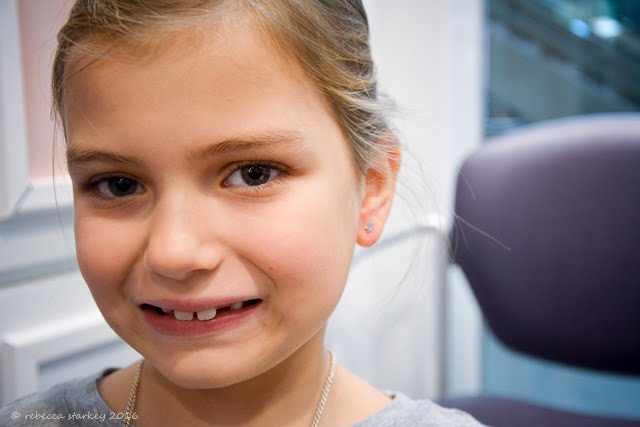 We rounded out our date with lunch at Applebee's and a few games of tic-tac-toe on the kids' menu. 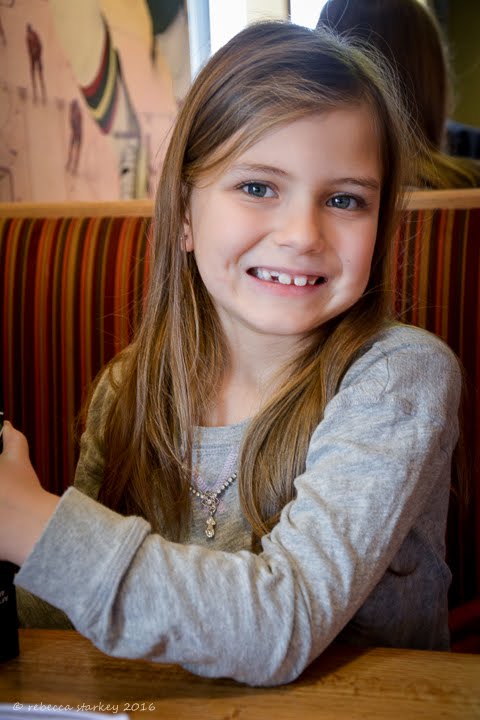 It's hard to believe, and sometimes hard to accept, that this sweet girl is changing from the spirited preschooler we knew to the sweet young lady that she is becoming. She has a bigger heart than any other person I know, constantly finding ways to help, love and serve the people around her. She delights in the "silly" of everyday life and thinks deeply about the things that matter most. She is a beautiful, marvelous creation of God and we are beyond blessed to be her parents. We love you, sweet Elise, more than we could ever say.
Posted by Beckie at 11:36 PM 2 comments: