A Weekend of Firsts 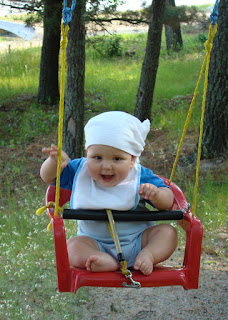 This was Wesley's first trip ever to the cabin. He was a little scared by the unfamiliarity of it when we got there Friday night, but he settled down and had a great time the rest of the weekend. He really liked the swing. No, he's not related to Aunt Jemima - I forgot his hat (bad mom) so he had to wear a rag on his head to protect his little scalp.

Okay, so this wasn't a first, but I had to include it since Jack spent the majority of his cabin time (he literally spent three hours on the beach Saturday morning) directing the construction crew you see below. 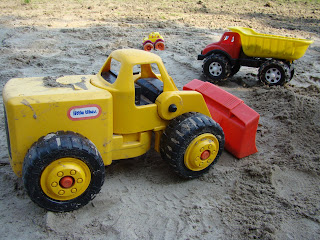 The crew chief: he takes his job very seriously. 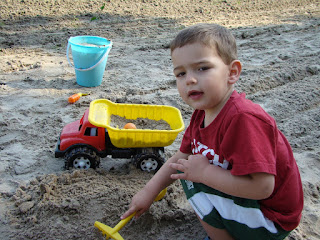 There were a lot of firsts for Jack (he just didn't spend much time doing them). He got an actual ride on the buggy (the 4-wheeler for those of you who aren't intimately familiar with Jack's world). Up until this point he had to just get on and pretend. This year he actually got to go on a ride with Sean. He also went fishing for the first time. He didn't catch anything and got bored with it pretty fast. He liked the worms. He got to drive the boat by himself for the first time too (maybe because his arms are finally long enough to reach the steering wheel when he sits in the captain's chair). Also a job he took very seriously. 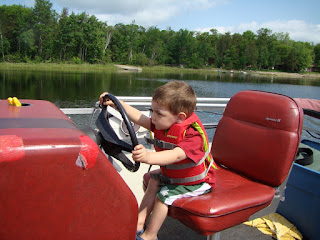 It was our first experience with sleeping in the back bedroom with 4 people. It was a little crowded, but manageable. I know how to pack for next time now. Aunt Linda and Uncle Bob were in MN for a couple weeks and wanted to spend some time at the lake. We headed up their first weekend there to visit, celebrate my mom's birthday and celebrate Father's Day. We had a fun time and are looking forward to their next visit.

I know it's a little late, but we've been really busy this June. Here are some pictures from Cincinnati.

Creation Museum: Very interesting. I would recommend a visit, but be prepared to read a lot. And make sure the people you go with (not a 2-year-old) are prepared to read (or be read to) a lot too. I'd love to go back in a few years when the kids are older.

Cincinnati Zoo: A great zoo, although it rained on the day we chose to go. It just made it that much more exciting. Despite wearing ponchos, we still ended up VERY wet.

Cincinnati Fire Museum: This was by far the highlight for Jack. He got to "drive" a fire engine (it was really just the top front 1/4 of the cab, but it had a steering wheel and some switches so he didn't care - who needs wheels?). We had to have some lessons about sharing because as soon as Sam and Caleb even stepped near the fire engine, Jack began to scream.

Parky's Ark Water Park: Mid 90s and humid is perfect weather to spend an hour or so at a water park. Jack was apprehensive at first, but by the time we had to leave he was begging (by begging I mean freaking out and crying at the mere mention of getting in the car) to stay. He just stood under the rainbow and said, "It's like a shower" over and over.

Riverboat "Cruise": After the water park, we headed to downtown Cincinnati to take a paddle boat tour of the city. There had been a lot of rain so the current in the Ohio river was strong and the paddles weren't strong enough to get us upstream. Instead, we were pushed by a tug boat. A very different experience than what I expected. Nonetheless, it was an interesting history and city and we got to ride on a boat.

A Sceptre shall rise out of Israel.
Numbers 24:17
There is a view of Jeses which men are slow to see, but some day all the world shall know that "A Sceptre" shall rise out of Israel, and evil will be destroyed before His righteousness more swiftly than ice must melt before the glowing sun. It is in the very nature of things that sin must be consumed before His glorious holiness. Can it be other than the love of sin that blinds the eyes of men to His consuming righteousness? "Search me, O God, and know my heart. Try me and know my thoughts, and see if there be any wicked way in me and lead me in the way everlasting." Amen.
I am often apprehensive to ask God to search my heart because of the sin that lives there. It's comforting to know that the Lord has authority over all my sin and by His power I can overcome it.
Posted by Beckie at 2:26 PM No comments:

We've been working on scripture memorization with Jack over the last few weeks and we think, for a two-year-old, he's doing pretty well. He can recite Mark 12:30 and 1 John 1:9 pretty well and now we're working on Psalm 119:11. All this is great, but a little meaningless if he doesn't understand what he's reciting. So the other night we asked him a few questions to see if he had any idea what he was talking about when he "performed" for us each night. See the conversation below:

I guess we have a little more work to do.
Posted by Beckie at 3:09 PM 5 comments: