Getting the kids cleaned up from breakfast each morning is quite the process. Wesley was first this morning and, after being wiped up, was playing with the parking garage. Said parking garage has an elevator that dings every time it goes up and down. Ding, ding, ding it went over and over and over. As I was walking over to Jack with the wash cloth, he was frantically flapping his hands saying, "Ding, ding, ding! There's a fire! There's a fire!" I got a hold of one of the flapping hands and he immediately stopped "ding-ing" and said "Oh, someone must be cleaning the fire bell!"
Posted by Beckie at 2:08 PM No comments:

A Little (and I Stress Little) Color

The siding has been going up on the house this week and I'm a little nervous about the end result. We didn't have a lot of color choices and we went with the "boldest" options they had (green on the bottom, tan on the top), but it still looks a little drab to me. I'm hopeful that when the garage doors go on (they're white), the door is painted (it will be the color you see on the upper story) and the pillars are on (green with white trim) that it will all pull together and the colors will look a little bolder. Here's to hope... 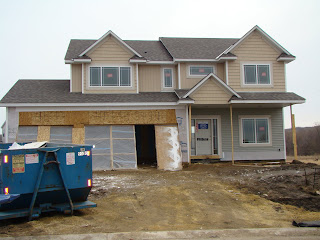 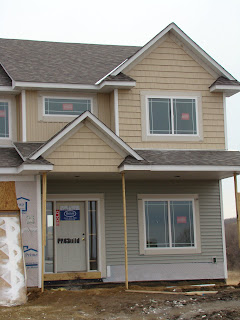 I've known for a long time that the simplest things entertain our children for the longest periods of time, but it hasn't been until recently when we've been cleaning things out that this has been more evident. In this picture you can see Jack playing with a plastic-coated wire shelf, you know...the kind that you find in closets (thus far it has provided hours, and I mean hours, of entertainment being used for a trailer, a boat, a combine, a dock, etc.) while Wesley examines the underside of the dinging room rug. Apparently the rug is more interesting when different table and chairs are sitting on it. 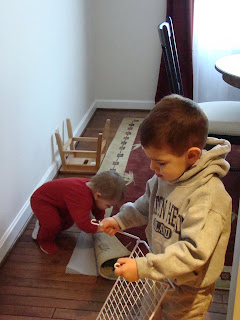 We also have an abundance of boxes floating around. This particular morning, Jack and Wesley were playing together as "neighbors" in their own box-houses. "How sweet," I thought, "I should get a picture of them." Below is the best picture I got of the boys together. And by "best" I mean that they were both in it. Who knew that box-houses were meant to be entered and exited so frequently? 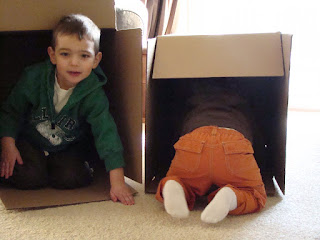 I did manage to get a couple good shots of them individually. 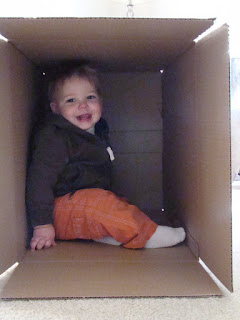 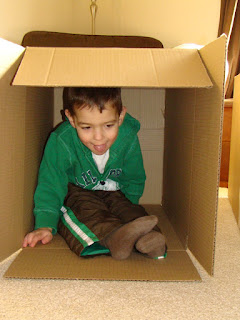 Conclusion: If you want to entertain your children (or "young-at-heart" adults for that matter) without spending any money, find a few big boxes and dig out some old junk that's been sitting in your closet for years.
Posted by Beckie at 1:32 PM 2 comments:

After over sleeping Friday morning, I awoke to find Sean in the kitchen with Jack nearly 30 minutes late for leaving for work. "Shouldn't you be gone?" I asked him. "I'm not going to work today," was his reply. "What? Why?" came my panicked response. "Don't worry about it," he told me (yeah, right), "just go back to bed." There was no way I was going to sleep after that so he gave in and told me I needed to get dressed because I was leaving at 8:30. Didn't tell me where, just told me I was leaving. I obliged. I got in the car at 8:30 (well, it was 8:40 because I can never leave on time anymore) and found myself at a spa being pampered with a facial, paraffin dip for my hands and feet and a new "do"...bliss.
I came home a couple hours later to find out that I was also being treated to lunch. If you haven't tried Stella's Fish Cafe in uptown, I highly recommend it. We were seated in the kitchen and, upon arrival, found a personalized menu wishing a certain someone Happy Birthday. Then I was informed that we had some "time to kill" before our dinner reservation. Dinner too? I thought filling that time was open for discussion, but I soon learned that most of it would be filled with drive time to Duluth. A two hour trip ended at Black Woods on the Lake and a very nice dinner overlooking Lake Superior. After dinner we were back in the car to continue our journey to Lutsen Resort where we would stay until Sunday. Wow! Three entire days spent with my favorite person and only one child to care for. The only thing I didn't like about my surprise birthday weekend was that I had to turn 30. Please note that this is the one and only time I will admit my real age and from now until I die turning 30 will go unmentioned.
Below are some pictures from our trip to Grand Marais. 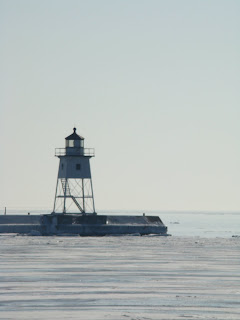 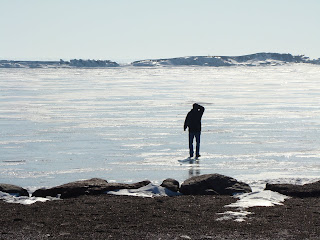 Sean went out and stood on the ice 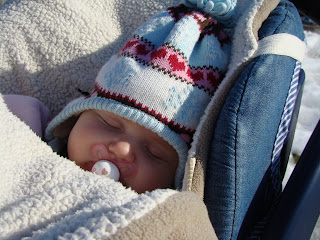 This is how Elise spent her afternoon outside
***I would like to apologize for the formatting of this post. I don't like when everything is centered, but I've tried all my tricks and can't change it.
Posted by Beckie at 1:56 PM 3 comments:

Does this mean I've been successful at teaching Elise to sleep anywhere or I've failed at juggling the demands of three children and our youngest must sleep on the changing mat? 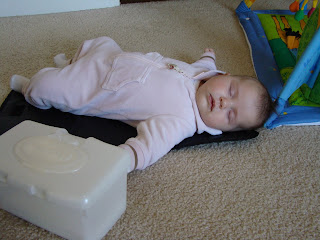 Posted by Beckie at 1:38 PM No comments:

Who does this baby mohawk belong to? 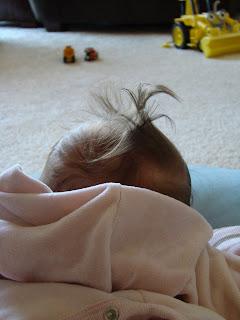 Maybe a profile shot will help you guess... 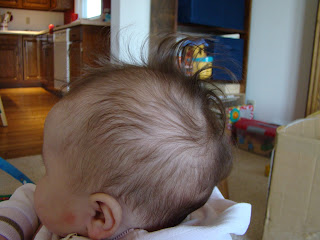 None other than our sweet Elise... 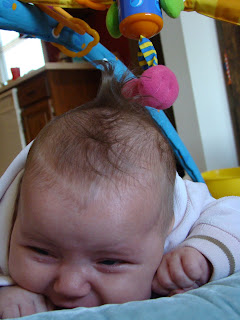 Posted by Beckie at 1:28 PM No comments: 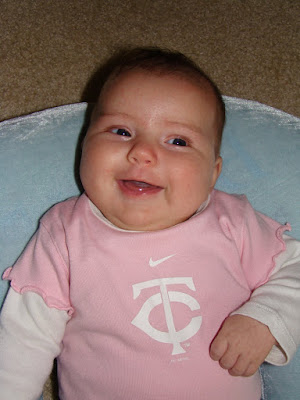 This picture may be more appropriately titled "Our Only Twins Fan." Not because the boys aren't Twins fans, it's just that they have no idea who the Twins are. We don't watch too many sports at our house. This past Sunday afternoon, in an attempt to distract the boys for just a few minutes while he finished packing, Sean turned on the tv and searched for something kid-friendly. College basketball was it. I walked downstairs and asked Jack what they were watching. "Hmm, baseball," was his reply. I guess we need to expose him to more than a few minutes of football on Sunday afternoons in the fall!

So back to Elise...she had her 2 month check-up today. She is 14 lbs, 11 ounces and 25 1/4 inches long...99th percentile for both. The nurse even commented when she brought us back that when she called Elise's name and we stood up she wondered if we should be doing a 4 month check-up instead of the 2 month. Everything else checked out great. She's healthy and happy. Except this afternoon she's not too happy because she got three vaccinations that, I think, are bothering her...poor baby.

Life Is a Highway

Around our house the "Cars" theme song has become a well-known tune. We often hear our older son belting out "Life is a highway. I wanna drive it all that long. Gimme gimme air" while racing Lighting McQueen all over his road rug (a small rug w/ roads, trees and bridges all over it). Sean and I have both tried to correct him telling him, "No, Jack, it's all night long." The response was always a blank stare and then a continuation of the same incorrect line of the song over and over again.

Last week we were riding in the car listening to a little Tom Cochran on the iPod (you must be listening to Life is a Highway if you're driving on the highway - it's a rule) and Jack says to me, "Mommy, did you hear them say 'I wanna drive it all night long'?" "Yes, honey," was my reply. To which, Jack's response was "Huh, maybe I should sing that too." Great idea, Jack.
Posted by Beckie at 2:48 PM No comments:

Last Saturday morning my baby turned into a little boy. Wesley went in for his first haircut. He was a little apprehensive at first, but he warmed up in a minute. The stylist (do 1-year-olds have stylists?) tried to distract him with Dora the Explorer on tv, but given that the little tv that Wesley has seen has been limited to Baby Einstein and Curious George, I'm sure he was thinking "Dora the what? Is that something I eat? I want your spray bottle, lady." 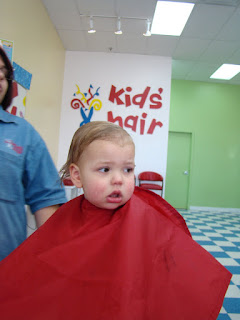 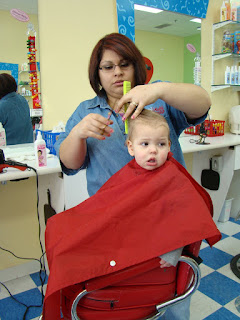 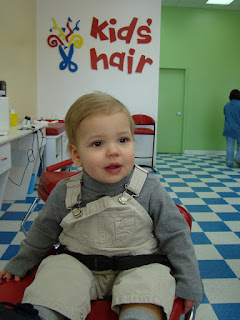 All done. Who is that handsome little boy? 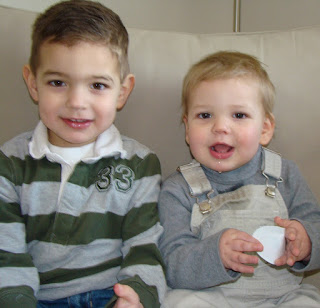 No more shaggy hair around our house!

At least think of something more creative

The kids and I ventured out last week and, based on the comments we got, you'd think we'd arrived in a bus with a trailer and about 10 more people. We made a quick stop at Barnes & Noble to play with Thomas and then headed over to the mall. As we were walking in (Elise and Wesley in the double stroller with Jack running along side) a woman was walking in next to us giving us sideways glances.

When leaving the mall, we hopped on the elevator with another mom and her two children in strollers.

Other Mom: "How old is your little one?"
Me: "Almost two months"
Other Mom: While looking over the rest of the brood, "You must be busy" (does this sound familiar?)
Me: "Hmm...yes"

Why don't people say what they're actually thinking? Something like:

Then I think about our dear friends who have three rambunctious, yet lovable, little boys and are expecting twins in the next few weeks and I eagerly anticipate the myriad of comments that will come their way when they go out. It puts into perspective the very few "you must be busy" comments I have received and reminds me to keep my stereotypical, cliche comments to myself.